The script has been personally donated to History Life by Carlo Croccolo and is the one in reference to the episode 10. It is not completed as it has only the pages (From page 19 to page 54) related to Croccolo’s part. Aside from Croccolo’s signature the script has actress Isa Danieli’s signature on it too: she had a part alongside him in the series. 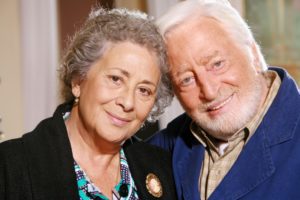 CARLO CROCCOLO BIOGRAPHY :
Carlo Croccolo (9 April 1927 – 12 October 2019) was an Italian actor, voice actor, director and screenwriter. Born in Naples, Croccolo began his acting career on the radio and he appeared in more than 100 films since 1949. His debut came in the 1949 film The Firemen of Viggiù and he made his first television debut in 1956. He was best known for some of his collaborations with Totò mainly throughout the 1950s and 1960s. Croccolo’s international appearance came from the 1996 film In Love and War directed by Richard Attenborough. He also had an intense theatrical career as he often starred in plays directed by Eduardo De Filippo and Giorgio Strehler. As a voice actor, Croccolo performed the Italian voice of Oliver Hardy in the 1951-1953 redubs of Laurel and Hardy in which he was paired with Fiorenzo Fiorentini (the Italian voice of Stan Laurel). He returned to dub Hardy in the 1968-1970 redubs, this time, paired with Franco Latini. Since 1957, Croccolo had served as a dubbing artist for Totò in some of his films. In 1989, Croccolo received the David di Donatello for best supporting actor in the film ‘O Re. Croccolo died in his home in Castel Volturno on 12 October 2019 at the age of 92.
ISA DANIELI BIOGRAPHY :
Isa Danieli (born 13 March 1937) is an Italian film actress. She has appeared in 32 films since 1962.
SKU: AutScript0001 Categories: Actors, Autographs, Carlo Croccolo, Cinema, Cinema, Isa Danieli, Italian Actors and Directors, ITP (In The Presence), Memorabilia, Our Exclusives, Script Tags: Copione, Photo Proof, Script